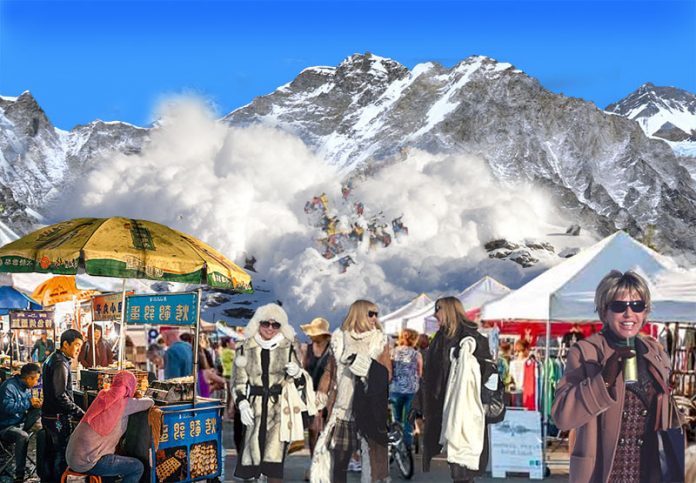 KATHMANDU: The annual death toll on Mt. Everest took a freakish twist yesterday after a brawl broke out in the long queue before the Hillary Step bottleneck, triggering a cascade of climbers down the steep slope.

Shingaloo Sherpa, a Nepalese porter at Base Camp, was the first to notice something amiss. “I heard a rumble,” he said, “and looked up to see a cloud coming down the mountain. I thought it was a snow avalanche at first. Then, as it got closer, I saw the colorful parkas and boots in the mist. And I knew it was a people avalanche. I tried to warn the others, but it was too late.”

Surviving witness Zvest Jakopič, a Slovenian climber in the queue, said a fight broke out between a German team and two Argentinian climbers over the 2014 World Cup final. The Germans won that match against Argentina. “Long wait stressful. You not to think they have energy for fight at such altitude,” said Jakopič. “But World Cup raise all persons’ energy level. They shove and shout at first. Then hurl oxygen bottles and use climbing poles like fencing rapiers.”

The combatants lost their footing, rolling down into the climbers behind them, all 150 falling like dominos. The tumbling scrum plowed through a forest of occupied tents and yurts before smashing into a crowded cluster of vendor stalls at the center of Base Camp, where Chinese merchants cater to the growing tourist numbers, hawking the usual flea market fare: cheap pocket knives and sunglasses, Yeti bobber dolls, capsules of rhino-horn powder labeled “Get to Top! Guarantee Summit Boost!” and macabre souvenirs, most of them spurious: Hobnail of Hillary Boot! Hair of Palijor! Toe of Mallory! is a  bestseller. Many visitors chopper up just for the shopping and awesome views.

A vacationing couple from Peoria, Zach and Miriam Vanderslack, suffered minor abrasions, but the psychic wounds may take longer to heal. “We were here for the Graveyard in the Clouds tour,” said Miriam, referring to the popular snowmobile tour of the many mummified climbers littering the mountain. “But we didn’t even have to leave camp. The tour came to us. Bodies all around us. Dead I can handle, but all those injured shrieking for help… It was horrible. Plus the food is overpriced, the bathrooms are primitive and the garbage stench is awful. We’re never coming back.”

Nepalese rescue operations are still underway with a around-the-clock fleet of high-altitude choppers transporting the 75 seriously wounded to hospitals in Kathmandu. Another victim may be Sheldon Adelson, the American gambling tycoon. In the wake of the record-breaking tragedy, Nepalese authorities announced that his planned High Stakes Heaven mini-casino at Base Camp is on hold.

The plan includes the worlds’ longest cable gondola ride ferrying elite gamblers to the top. But Adelson vowed to appeal the decision and raised the ante: “The Nepalis really need this, just like the Navajos and Apaches. I’ll throw in a world-class bar and spa in honor of the dead. More people die every day from toothbrush accidents than on Everest in a year. Give me a break.”