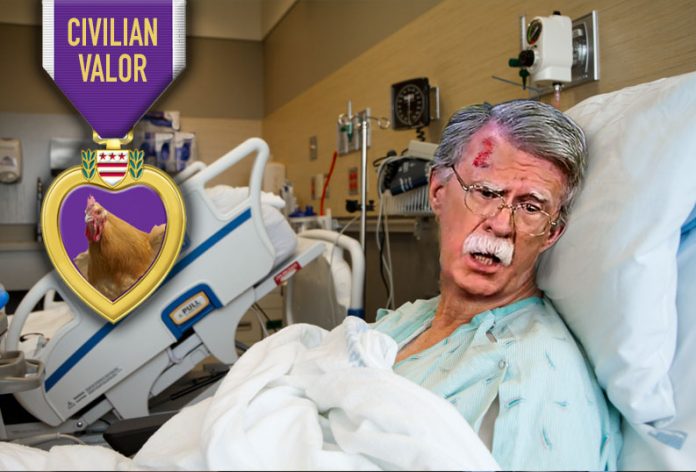 WASHINGTON: After a grueling day of American Enterprise Institute sessions, John Bolton and Max Boot retired to a bar in D.C.’s Adams Morgan area for a round of drinks when “all Hell broke loose,” says Bolton.

Witnesses say the two men got into a heated drunken argument over whether Iran or North Korea should be invaded first in the next round of American muscle flexing abroad. That’s when Brian Holbrook, a one-armed, wheelchair-bound Army veteran wearing service patches on his vest intervened.

“You two want to pick a fight?” said Holbrook, wheeling up to the men’s bar stools. “How about with me? I’ll take on both of you pathetic mommy-tit suckers!” Bolton then asked him if he was a veteran. “Don’t I look like a veteran?” Holbrook answered, waving his prosthetic right arm.

“Thank you for your service,” Bolton and Boot replied.

“Much obliged. Now let me thank you for your service,“ Holbrook responded, tossing a beer into Bolton’s face. Boot tried to push Holbrook away, but the veteran grabbed his pinky finger with the claw of his artificial arm. Boot crumpled to the floor, screaming, “Help, police! I give up! Medic! Corpsman! I’m wounded! Oh God, God, mercy, mercy, please somebody help me!” while Bolton bolted out the front door, knocking himself out cold against a light pole. Witnesses say both men completely evacuated, leaving puddles of urine and runny excrement on the floor. “They won’t be allowed in here again without diapers,” said the bartender.

Holbrook has been charged with assault while Bolton and Boot are recovering in a shared room at Walter Reed Medical Center in Bethesda. An ER nurse in attendance, speaking anonymously, said both men were difficult patients: “Under sedation, Bolton kept kicking his bedsheets off and crying for his mother. We had to put a catheter on Boot because he kept wetting the bed. But we had to remove his penis extender first.”

“Bar fights are hell,” said Bolton. “It was a vicious battle, but we survived. I’ll have PTSD for the rest of my life. But I’m not as bad as poor Max.” Boot has remained curled up in a semi-comatose fetal position ever since the incident, whimpering nightmare gibberish. “But we both signed up for this,” Bolton continued. “It will not deter us from manning America’s front lines of defense.”

The AEI stated that it will start providing security for members venturing into the Adams Morgan area, while nominating both men for a new civilian Purple Heart award. 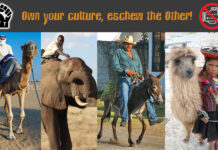 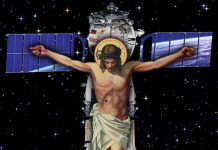 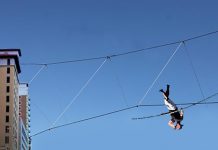