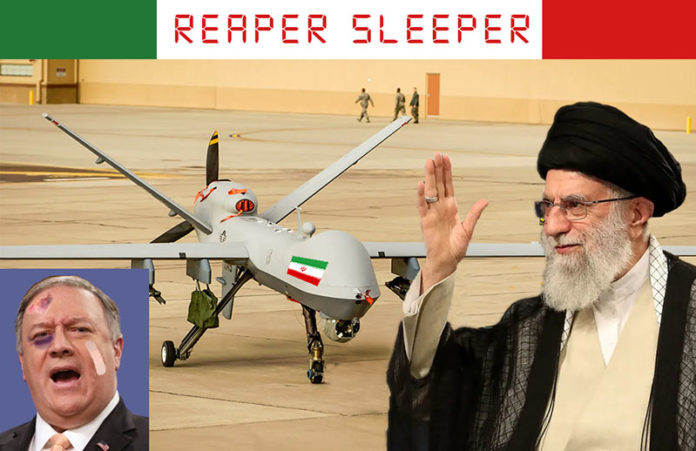 American defense officials are choking on crow as Iranian leaders brag that a USAF “smart” drone has defected to Iran of its own volition, after launching a retaliatory strike on Mike Pompeo yesterday.

After a secret mission in Iraq to shore up support for the continued American troop presence there, the Secretary of State was headed to the Baghdad airport when an MQ-9 Reaper drone (ironically, the same one that killed Gen. Qassem Soleimani last December) patrolling the skies turned traitor, firing a missile at Pompeo’s motorcade. Pompeo and his staff suffered minor scratches and bruises as the missile struck a concrete highway divider, flipping over two cars in the convoy. The drone then flew on to Tehran.

Dept. of Defense spokesman Jonathan Hoffman admits that the drone’s brand-new AI module had incorporated some new programming after complaints by “liberal critics” that its automatic targeting acquisition program was incapable of distinguishing insurgents from innocent civilians. Thus new algorithms were added to the drone’s brain, for “empathy enhancement” and the genuine “promotion of peace” — the stated mission of the Dept. of Defense.

The latter imperative may have been taken a little too seriously by the drone’s brain, says, Hoffman, leading it to target what it judged to be the primary threat in that regard: Mike Pompeo. The new empathy algorithm probably caused the missile to fire slightly off target as a “humanitarian warning.”

Pompeo is still hospitalized at Bethesda, shaken and furious: “This is what happens when touchy-feely types toss their two cents into the business of Murder, Incorporated. I want that traitorous HAL sonofabitch extradited and dismantled limb from limb!”

That is unlikely to happen: Iran has already forgiven the Reaper for the Soleimani strike and housed it in a special Hangar of Honor, declaring it a national hero. Supreme Leader Ali Khamenei promises to nominate the drone, now known affectionately as “Allah Kamakazi,” for the Nobel peace prize.