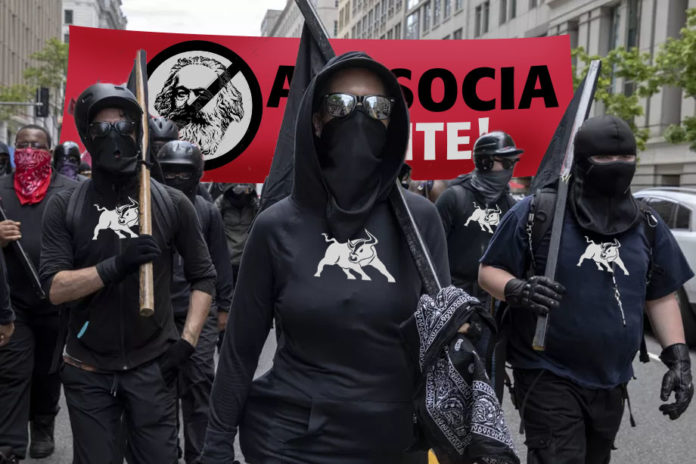 At a folk music festival in Brooklyn’s Prospect Park last weekend, Deirdre Carpenter was manning a Bernie Sanders campaign-sponsored voter registration table with her boyfriend when a group of black-clad, masked radicals began hurling tomatoes at them. “One of the tomatoes splattered our Bernie poster right in the forehead. It was like a symbolic assassination attempt,” Deirdre told reporters later, breaking into tears.

The masked militants ended the hit-and-run attack with a flurry of tossed manifesto flyers before fleeing. Dierdre’s boyfriend, Mayo Sparks, followed them for several blocks, where they removed their masks before boarding a couple of black Mercedes limos, toasting their raid with bottles of wine.

A specter is haunting America. The specter of Socialism. Like a deadly virus it spreads, infecting minds with discredited panaceas and corrupting the morals of youth while the bedrock pillars of society crumble under defamation and crushing regulation.

We, the generals of finance whose ingenuity has engineered the greatest economies of all time… We, the talented grunts who man the trenches of trading pits at great risk to our health… We, the Atlases who hold the burden of all human civilization on our shoulders… have had enough.

We, ANTSOCIA, now commit our lives and sacred honor to quarantining this pandemic. Futures, and the future, are at stake! You have everything to lose if you don’t loosen our chains!

The Street, United, Will Never Be Defeated!

“That’s what they were chanting the whole time,” said Dierdre. “The Street, united, will never be defeated!” They also left posters for a singer I’ve never heard of…