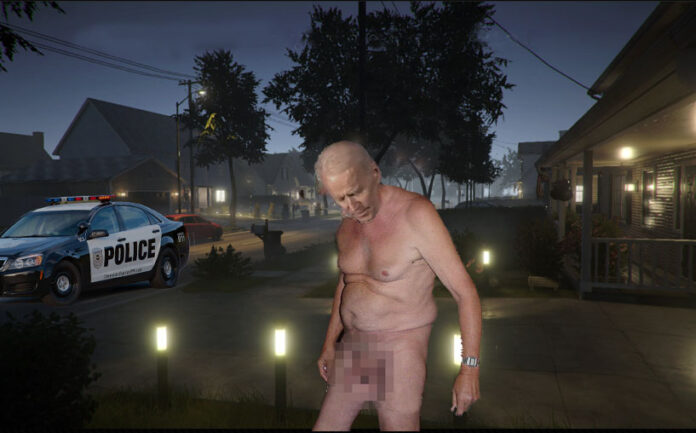 WILMINGTON, DE: Joe Biden finally made an appearance from his long seclusion last night, but not one his campaign is celebrating. Police responding to a suspicious person call found the presidential candidate wandering blocks from his home, confused and without clothes. As the officers confronted him, Biden asked what the problem was.

“I’m Joerak Obiden and you’re a lying dog-face pony soldier,” said Biden. The officers then suggested he look down. “Damn, you’re right. I am naked. I guess I must be streaking. But a lot of people are streaking these days, aren’t they? It’s a populist fad.”

Asked what, exactly, he thought he was doing, Biden replied that he was searching for his lost “walkie-talkie,” presumed to mean his mobile phone. “Then I heard music outside,” he said. “Like somebody playing a record player. It sounded like Woodstock. Is that still going on?”

As the officers helped him into the back seat of the patrol car, Biden asked if they were taking him to the party. No, the officers replied, they were taking him home. “The party’s not at my house!” said Biden. “I want to go to the party and smoke some of that hoochie-coochie stuff all the jazz cats smoke. I’m cool, man. I’ve always been cool. I love that black song, that… Sly is Stoned song, Jivin’ You Higher. Blackfricans really love me. I’m really a counterculture kind of guy. I’ve got tie-dyed socks… Man, it’s really dark out here. Are we in an eclipse?”

Wilmington police say no charges will be filed. Biden’s campaign manager, Greg Schultz, at first denied that the naked man was his client, but a video recorded by a nearby resident has gone viral on social media, confirming Biden’s identity. Mr. Schultz then explained:

“Mr. Biden was simply going for a neighborhood jog to keep in shape for the rigorous final laps of the campaign, and forgot to put on his running shorts in this very hot weather. At this late hour, all young children were in bed and none saw him. He has apologized deeply to any offended neighbors. And we must note, as is apparent in the video, Joe Biden is in much, much better physical shape than Donald Trump. Joe Biden only eats organic, free-range cheeseburgers made in America, and baked, not fried, fries.”