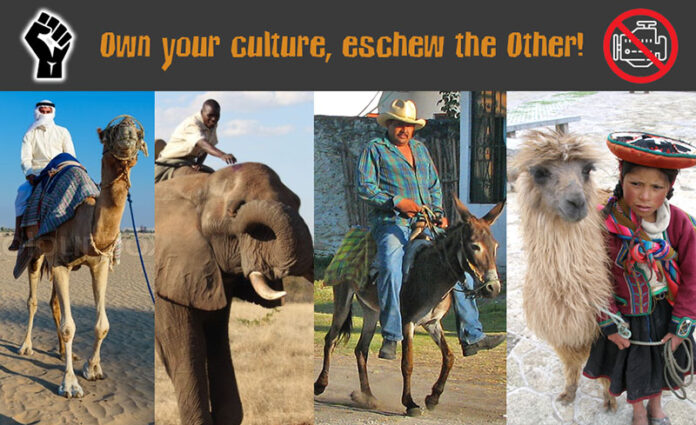 A white male resident of Little Rock, Arkansas has sparked a storm of Twitter condemnation after proposing that racial minorities should not convey themselves in any vehicle using an internal combustion engine.

Byron Beigehaut confesses that his “white fragility” was initially triggered by the current uproar over white people condemned for wearing dreadlocks, Asian dresses to proms, cooking with ethnic recipes, and other sins of “cultural appropriation.”

“But then I thought about it, and now I’m on board,” said Byron. “I totally support the movement. I’ve stopped listening to R&B and rap, I’ve stopped eating Mexican, Chinese and Indian food, I’ve stopped wearing my Asian-derived flip-flops, and I will never, ever say things like ‘gung-ho, safari, tsunami, armadillo, and mosquito’ again.

“I encourage all woke Americans of color to fully get with the program and stop using the tools of white hegemony! Like the automobile, airplane, bus and train — all invented and engineered exclusively by white Europeans and their descendants in America. How can you be free if every day you’re complicitly engaging with the technology of the oppressor, reifying his internal-combustion supremacist power trip? African-Americans, Latinos, Asians and middle Easterners unite! You should only transport yourselves by  burros, camels, llamas, water buffalos, or other indigenous beasts of burden!”

Another tweet in the feed: “Some people need to learn the difference between appropriation and appreciation.”

Assailed by infuriated college professors, students and activists nationwide for “racist agitation,” Byron replied that his exhortation would “actually go a long way toward alleviating our traffic and carbon emissions problems,” and he was just “using logic to make a sincere case for ‘authentic cultural self-sufficiency.'”

“Logic is a widely recognized hammer in the toolbox of white male privilege,” replied one feminist professor on Twitter. “This man is obviously incorrigible. To make an unambiguous point, I really think he should be castrated — with anesthetic, of course — and his white male genitals impaled on a pike placed on the National Mall.”

Another professor posted: “No, we can’t go that far. That’s barbarism. His excised genitals should be cremated and the ashes scattered over a very polluted body of water. I know this sounds extreme, but I think such an example would really help bring us all together.”

“Can we just do an effigy of his genitals?” tweeted a male professor.

Beigehaut has reportedly moved to another city and is now living under an assumed name.