WASHINGTON: The National Institute for Standards in Truth (NIST) issued the final update of its 9/11 investigation today, announcing that all anomalies troubling 9/11 Truther loons have been rationalized, thanks to new evidence provided by NASA. “They can all take their tinfoil hats off now,” said NIST chief Henry Swallowfirth. “Science, not moonbat conspiracy theory, has triumphed.”

The new evidence, from NASA’s deep-space probe Voyager 2, puts to rest the three so-called “physical anomalies” that have deranged Truthers:

2. The aluminum nose and hollow fuselage of Flight 77 plowing through five rings of reinforced concrete at the Pentagon

3. The Shanksville “Gopher Hole” swallowing Flight 93 before burping up a widespread debris field.

The latter had particularly troubled NIST, says Mr. Swallowfirth. “How a crater engulfed an entire jetliner, leaving no bodies or parts larger than a thumb drive before vomiting out an engine over 2000 feet away and other debris over eight miles away… we’ve been reviewing that diligently, but frankly, none of our field investigators wanted to go near that hole. We feared it was some kind of geomagnetic Bermuda Triangle thing that could suck us in and spit us out, too. Pretty damn spooky. But now it’s all settled.” A review of Voyager 2 photos revealed that it had turned its camera around for selfies with Earth in the background when its sensors detected an unusual disturbance in the space-time continuum and zoomed in for a close-up.

“The result is the wonderful image released today, clearly showing Earth bedazzled within a transient Black Hole on 9/11,” says Mr. Swallowfirth. “We don’t know much about Black Holes — they’re full of both known and unknown unknowns. But one known known is that our known laws of physics are suspended in them. Virtually anything can happen, however incredible. We’re sorry to disillusion the Truthers, but sure they’ll find fertile ground elsewhere for their ludicrous explanations.” 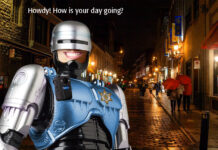 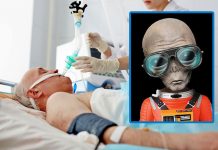 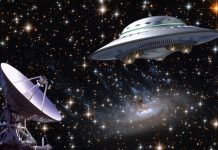