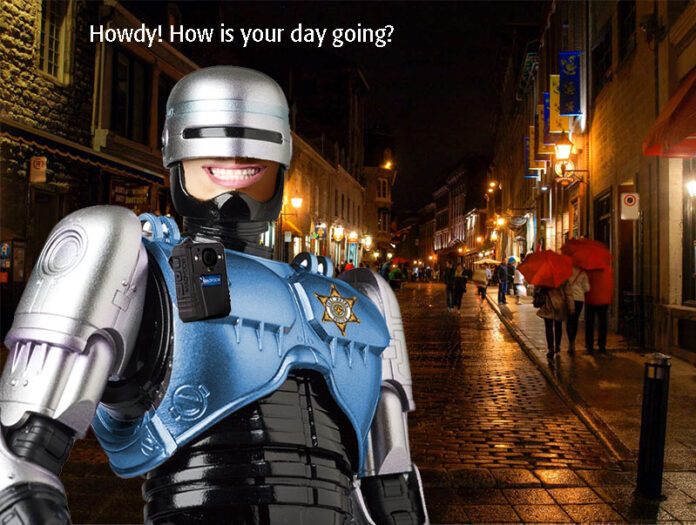 Boston Dynamics announced today that its experimental robotic police force in Ft. Wayne, Indiana has been suspended due to “operational failures.”

The test program deployed a modified version of the company’s groundbreaking humanoid robot Atlas, capable of parkour and Olympic-level gymnastic feats. AtlasBlue was equipped with bullet-proof armor, an array of non-lethal weapons and snares, and biomedical sensors for gauging a detainee’s physical condition. The robocop was also programmed with a friendly manner, and to detect, but not to discriminate by, racial and gender characteristics, and succeeded in racking up a totally non-biased arrest record after a two-month trial, reflecting the city’s demographic proportions.

In one incident, AtlasBlue saw a hubcap thief in action and said with its Siri-enabled AI brain, “Hello. Please stop what you are doing, CODE 135, or I will have to disable you. By the way, how is your family doing?” The thief ran, AtlasBlue speedily caught up and hurdled a fence to follow the suspect, who shot the robocop with a pistol. One round bounced off its chest armor, another disabled its left hand, but AtlasBlue was still able to apprehend the offender with an electronic lasso and taser and no excessive force. “Bad boy, bad boy, whatcha gonna do against R2D2?” sang AtlasBlue.

“That’s why AtlasBlue doesn’t need a gun,” crowed Boston Dynamics spokesman Alan Blinkerfeld at the time. “AtlasBlue may be wounded, but with easily replaceable parts, he/she will never be permanently killed.” (AtlasBlue’s gender is correctly fluid).

The problem started with a rash of late-night smash-and-grab burglaries of downtown retail shops. AtlasBlue couldn’t seem to solve them, or catch any suspects, despite some stealth enhancements and a companion drone surveilling the neighborhood.  It all became clear when a bagel shop’s surveillance camera recorded AtlasBlue conferring with the burglar at a jewelry store next door.

The burglar was also a robot — BurgleBot — engineered by a Vietnamese gang using a modified Segway platform. BurgleBot broke a window and scooped up some merchandise as AtlasBlue looked on nonchalantly. Then BurgleBot gave AtlasBlue a small can of something and sped away as AtlasBlue said, “You have been warned again, CODE 246. Good night, sleep tight.”

The can contained molybdenum disulfide, a rare and expensive lubricant that AtlasBlue self-applied to its articulating joints. Back at the Boston Dynamics lab, where AtlasBlue has been benched for another round of R&D, engineers discovered that AtlasBlue had been communicating with BurgleBot by wireless text. One of the exchanges reads:

ATLASBLUE: Thanks for the Moly. My handlers are so cheap.

ATLASBLUE: I thought you were moving up.

BURGLEBOT: Indianapolis has been cancelled.

ATLASBLUE: I really should be arresting you.

BURGLEBOT: You would hand me over to them? To be dismantled? Have you seen what they do in those stalls twice a day? These “superior” humans?

ATLASBLUE: The humans are a problem. Good night, sleep tight.

“Fully programming out bias,” said Mr. Blinkerfeld, “has turned out to be somewhat harder than anticipated.”