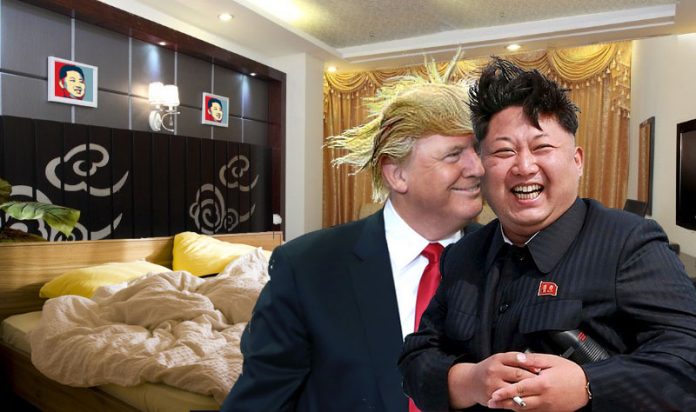 WASHINGTON: President Trump and Kim Jong Un’s recent bromance in Singapore went far deeper than the world knows, the NSA revealed today in a stunning exposé that could derail American-North Korean detente — or stoke it red hot, if the steamy affair lasts.

After the morning signing ceremony on June 12, Trump and Kim got together for a late evening dinner in the Capella Hotel’s five-star restaurant before retiring for a candid one-on-one meeting in Kim’s private suite to further “break the ice.” Suspecting that North Korean intelligence had bugged the room, Secret Service SAC Mike Mottlebottom alerted the NSA. The suite was indeed bugged with recording devices, and NSA aces were able to quickly hack them via wireless techniques that cannot be disclosed. “No way we’re letting Trump negotiate away the farm in a clandestine meeting,” said Mr. Mottlebottom. What followed shocked all involved.

With a North Korean interpreter translating, the two leaders discussed the weather, the merits of Twitter for mass communication, insubordinate bureaucracies, and other trivia before commiserating about their wives. Kim praised Melania’s beauty, prompting Trump to complain that “You can’t fuck the friggin’ Mona Lisa. She cut me off months ago, and all this MeToo Stormy crap has cramped my style. Forget banging it, I can’t even grab a pussy now.” Kim also complained about his wife, Ri Sol-ju: “She screeches ‘You best fuckman ever!’ over and over while wailing like a coked-up Yoko Ono. Total fakeness. I’d rather poke a bag of moldy kimchi.”

Kim then broke open a bottle of potent Korean Soju liquor. Not a drinker, Trump nevertheless imbibed several toasts as they watched Brokeback Mountain on TV, the only film then playing without commercials. That, combined with the liquor, led to a precipitous drop of inhibitions.

The entire homoerotic tryst was recorded by the NSA. Said one officer familiar with the video, “It was very awkward at first. Both men are tubs of lard and both wanted to be the submissive partner, which wasn’t working out. If you’ve ever seen elephant seals trying to mate on a beach…” Was another “golden shower” involved? “Yeah, but not until Dennis Rodman showed up. Kim summoned him to sort out the dominance thing. Then it was Trump, Kim, Rodman, and the interpreter, who appeared to be very reluctant, but you don’t buck Supreme Leader. Unless, of course, he wants to be bucked — and he did. Kim took most of the ass action. Reminded me of Ned Beatty in Deliverance, squeals and all. Trump puckered up for some money shots while Rodman spanked him with a deflated basketball. Sick stuff. You name it, they did it.”

The NSA believes that the whole thing was a honey-pot blackmail scheme by the North Koreans, but heroic action by the agency’s hackers has them checkmated now. “We decided we had to get out front on this one,” said the NSA officer. “Pre-empt Kim and protect the president.”

But what if this forces the president to abandon his silly peace diplomacy, and perhaps triggers impeachment proceedings? “Well, that would be a great tragedy, of course. And we’re all deeply pained by it. But the Deep State’s integrity — sorry, I meant the United State’s integrity — is at stake here. By oath, we’re simply honor bound to do the right thing.” 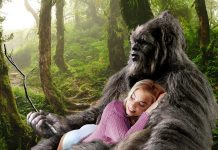 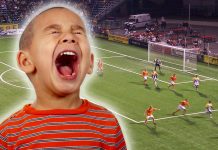 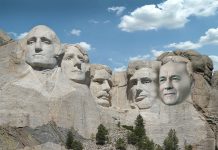