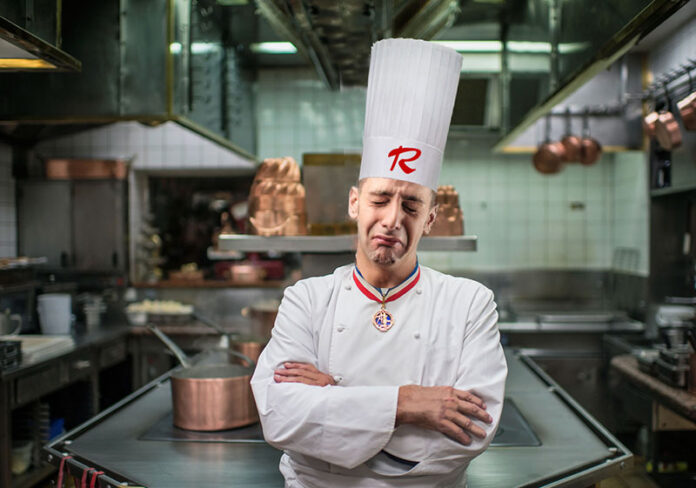 BELLINGHAM, WA: An award-wining chef has been fired from his job at a 4-star restaurant and dismissed from hosting a popular local TV cooking show after perpetrating a racist soup recipe.

For an episode of his show, chef Daniel Troutwater, a white male native Washingtonian aged 37, had made a black bean-tomatillo soup with sprigs of fresh bok choy and turmeric seasoning. A tasty and colorful soup, many agreed — but just a little too colorful for the taste of many in this community.

Ann Marie Astragalus, a sociology professor at Western Washington University, was the first to raise the alarm with a post on her Facebook page:

“I’ve seen a lot in my work, but never such a shameless display of cultural appropriation broadcast over the public airwaves. Yes, I know ‘black beans’ were not invented in Africa, but doesn’t this man know that on the slave trade ships, with a mostly illiterate crew, beans were used to count the slaves, like a simplified abacus? Does he not understand that, according to basic post-structuralist theory, each black bean signifies an African-American slave, plucked and stolen from her/his native soil and boiled alive? Why couldn’t he, a white cis-male with no discernible minority genes, have used white beans? Or butterbeans?”

Dr. Astragalus continued the critique in a TV interview: “All this could conceivably be forgiven, but then it gets worse. Much worse. He uses tomatillos — a staple vegetable in many Latino cultures, originally cultivated by indigenous Aztecs — with no attribution or hint of appreciation for the broader cultural context of this wonderful plant. Aside from tomatillo itself, does he utter a single word of Spanish in the broadcast? Even a simple hola! or provecho? No! The tomatillo has been ripped from its native roots, decentered, dehusked and violently chopped up without a… without a… I can’t go on…” Daubing her moist eyes with a tissue, the distraught professor regained enough composure to continue:

“On top of all this — Bok-choy and turmeric?! Has Troutwater ever visited China or Malaysia or India or Pakistan to fully understand their complex culinary traditions? I doubt it, considering that he relentlessly decontextualizes the fruits of  all of these cultures with a sinister hegemonic grin on his face. Troutwater needs to stick to his own privileged heritage that he knows best — catfish and grits with mayonnaise — or stop polluting public discourse with these sick rituals of brazen neo-colonial expropriation.”

This lit a fire in the WWU student body — Troutwater’s restaurant, the TV station and even his home were picketed by protesters denouncing “culinary racism,” demanding that Troutwater be promptly deplatformed. His defense— that he was only making an “intersectional melting pot” of flavors — only stirred more indignation. “‘Melting pot!’” huffed professor Astragalus. “Submerge and submit your cultural identity in a thick bisque of overpowering white male privilege. Fire this man now!”

After days of posting tearful videos confessing his inherent racism and begging for mercy, Troutwater has finally found other employment — dishwasher at Applebees.