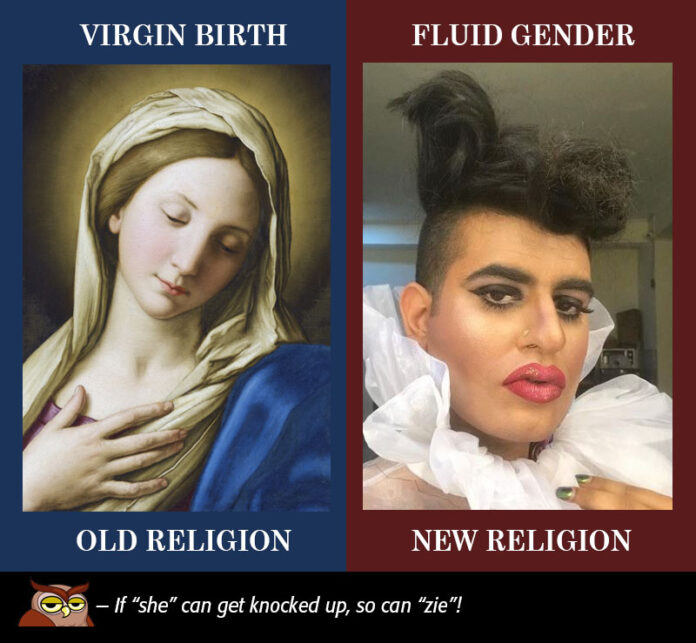 Geraldine Garza is proudly pregnant, despite not having a womb or any of the plumbing usually necessary to spawn a child. He — or “zie” as he prefers to be called — confesses to having traditional male junk dangling between his legs, shaves his facial hair daily, and looks like he could do the boot-camp standard two minutes of quick pushups with ease — knees off the ground pushups, that is.

So I ask him: “How will the baby be delivered?”

“You don’t have a vagina. So how will the baby get out?”

“Why do you assume it’s one baby, singular? It could be twins or triplets. Wouldn’t that be wonderful! But whatever the quantity, it will have to be a C-section, of course. I just hope I don’t have a bad scar. My boyfriend wouldn’t like that. I do a total body shave every other day. No, he wouldn’t like that. So, we do what we have to do.”

He takes another glug from a glass of Stella Artois beer, and sets it down next to two identical empties. His abdomen, behind a loose buttoned shirt with a seashell pattern, swells a little as he slumps in the soft chair, but nothing that couldn’t be attributed to a beer belly or an addiction to carbs. We old-fashioned women store weight on our hips and thighs. Cis-males put it all around the belly button.

“Aren’t you worried about fetal alcohol syndrome?” I ask Geraldine.

He thinks a few seconds before responding: “Why would I be worried about that?”

“You’re drinking alcohol. That’s a big no-no if you’re pregnant. The baby could be handicapped with low mental ability.”

“Nothing. I just thought you’d prefer one that’s not.”

“That is so prejudicial and hateful. Shame on you.”

“Sorry. I just want you to be aware of your options…Would you ever consider an abortion?”

Geraldine took another slug of beer, musing at the ceiling. “Maybe. Like, if Luke and I broke up. Then I would not want to have his baby. Sorry, Little Luke or Luka,” he said, patting his stomach apologetically, “but mommy needs a reliable cis-male to pay the bills while I’m making you.”

“Have you had a sonogram yet?” I asked.

“To find out the gender. The cis-gender, I mean. If the baby has a penis or a vagina. Also, just to make sure that you are actually pregnant.”

Geraldine frowned, swished his head negatively, then slammed the beer down on the table, splashing his leg. “Why are you gaslighting me with transphobic memes?”

“No, I just think there’s very few physical things women can do as well as men — and let’s cut the crap, by “men” and “women” I mean cis-male and cis-female or whatever new Newspeak noun you want to invent — very few physical things we can do better than men. Like having babies. The thing that, until now, only women could do for thousands of years, and now you’re trying to crowd in and take that distinction from us? Isn’t this all a little patriarchal?”

He was on his phone now, getting an answer and responding: “I’m being gaslighted with transphobic memes! I’m at the Oaxaca Baklava cafe, on the patio. There’s a horrible bitch here gaslighting me with hateful transphobic memes! She refuses to accept that I identify as pregnant. And she hates Down’s Syndrome children and all challenged people. Probably a Trump troll. I don’t feel comfortable. I don’t feel safe.” He moaned and started crying. “I don’t feel safe! Please help me!”

I tried explaining that, no, I was not a MAGA gal, and I wasn’t “gaslighting” him, or trying to upset him, but it was hopeless. He was wailing loudly now, as over-the-top hysterical as a Tennessee Williams diva in the drunken third act. The schussed diners at other tables stared at us…

The waiter dropped by to investigate, but he was shoved aside by Geraldine’s arriving compatriots — a half-dozen squad of hipsters and Antifa types, a few clad in all-black with scarves over their faces, two of them comforting blubbering Geraldine, the rest crowding around me, shouting, “Nazi! Are you proud of what you’ve done? MAGA hater! Terrorist! Fascist transphobe!”

There was no reasoning with this mob. So I stood up and shocked them by ripping open my blouse to expose my unbrassiered boobs. They all fell silent, even Geraldine. The cis-males were ogling. “When you sprout a pair like this to nurse your fantasy child, Geraldine,” I said proudly (I’m a well-rounded C-cup), “I’ll be the first at your baby shower. Until then, weep with envy!”

With that stratagem, I escaped with my life and honor intact.